We arrived in Beijing on Monday afternoon, and met at the airport by the first of our guides for the trip, Jenny. Beijing Airport – huge! I think there’s 5 terminals! We landed on a runway on the opposite side of the complex than we were meant to be on, and drove (taxied for you people who like the right words) around runways for about 15 minutes before we stopped. Rather amusing was the grass growing in the cross-lanes of the runways, and the guards standing at attention in the middle of no where! Once through security, there was a train ride to another terminal to collect our bags. I’m pleased we’re not flying out of there, in all honesty, too confusing. After our first taste of China traffic, we arrived at our hotel and settled in for a night off before the tour really started.

On Tuesday morning, we met Jenny and our driver, who we never did learn the name of, and started our day. First stop was Tienanmen Square, most famous outside of China for the student protest in the 80’s, but that seems to be not so well known here? What most Chinese people come to see is the Mausoleum of Chairman Mao. The line to get in to see the preserved body of the Chairman seemed to stretch on forever, although Jenny tells us it is normally much longer. Due to the Olympics in a months time, entry into Beijing has been restricted to “make security and prevent terrorism”. 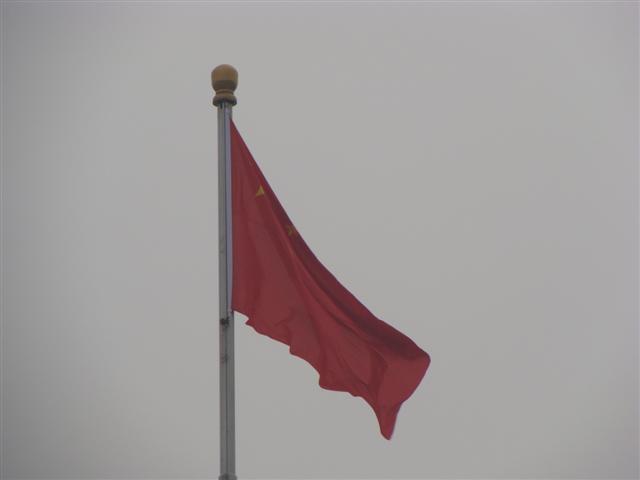 Tienanmen Square was also our first experience of being blatantly stared at – or mine anyway (Nathan says he got stared at last time). We got asked to take a picture with a little Chinese boy, which was interesting, to say the least! I’m not used to being part of the minority group, and to feel so much like something strange.

Right across the road from Tienanmen Square is the Forbidden City – the Imperial Palace during the Ming and Qing dynasties. The Forbidden City is separated into 3 parts – the first being the office block “where the Emperor exercised his supreme power over the nation”. The second section is the living quarters for the Emperor and his Royal Family (Empress, concubines and children), and the third section was the Imperial Garden. I actually enjoyed the garden most of all the mornings sights – the lack of trees everywhere else is a little discouraging! 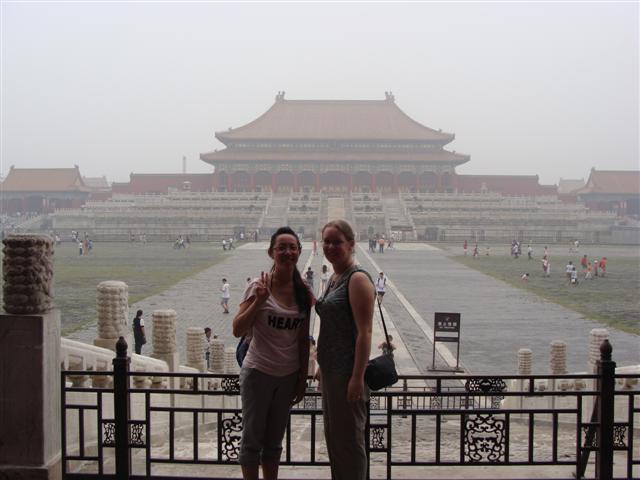 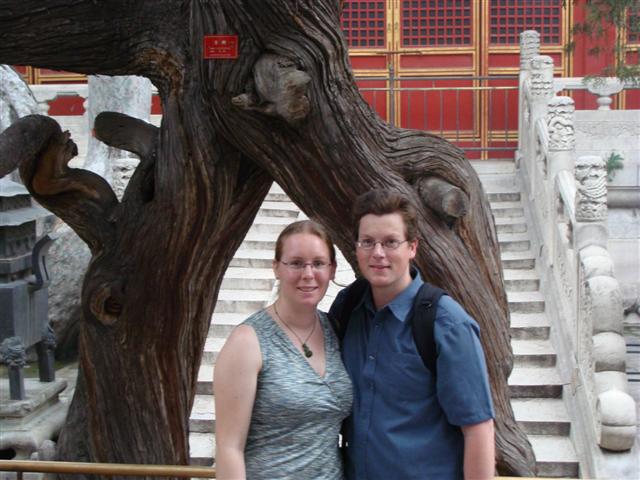 and us in the Imperial Garden – apparantly these trees are famous, the two trunks entwined together like lovers. There was a big line to take the picture underneath them, so we thought we should join in too!

After lunch, the final stop of the day was the Temple of Heaven. This is where the Emperor would go to worship the God of Heaven and the God of Good Harvest. The temple begins with the Circular Alter – a 3 tiered alter with 9 steps between each level, and each level is 9 paving stones wide. The ancient Chinese did have a thing with the number 9 – they called it the Supreme Number. At the top of the alter is a raised stone for the Emperor to stand on and offer prayers to the God of Heaven. The other major structure is the Hall of Prayer for Good Harvest, a huge and ornate circular building. 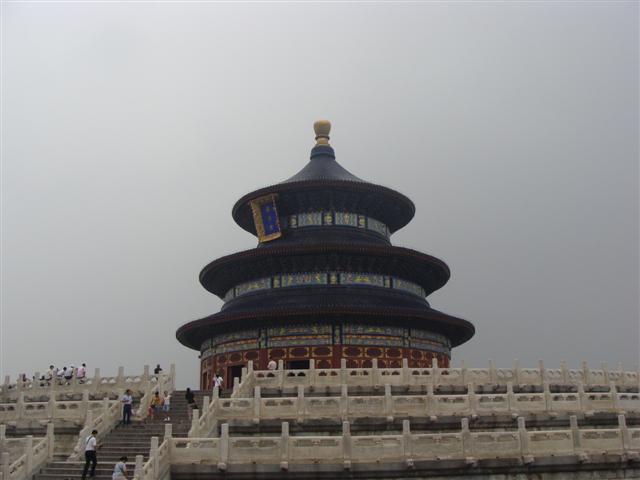 After dinner at a local McDonalds (don’t mock me – I’ve had enough of Chinese food already!) we went to see an acrobat show. Unfortunately the security guards were running around preventing people from taking pictures, so I have none to share. It was quite interesting, though.

So that was our first day in Beijing – 2 more to go!

This entry was posted in Uncategorized. Bookmark the permalink.

One Response to Beijing City